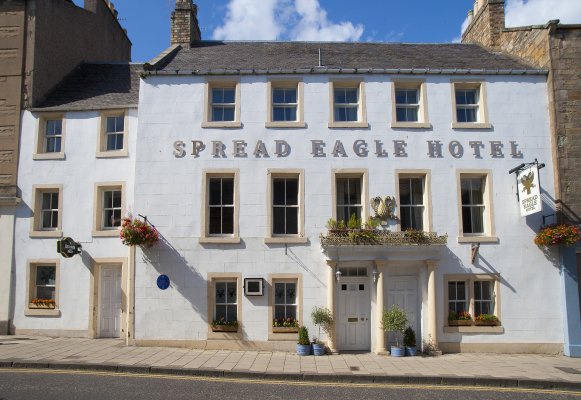 There has been an inn on this site for many centuries. It is possible that Mary Queen of Scots first lodged in the then inn when she visited Jedburgh in 1566. However, there was a fire and she had to find alternative accommodation. (See Mary Queen of Scots House)

The present building and the features of its façade date to the 18th Century. Note the double-headed eagle over the entrance. There was stabling behind to accommodate coaches and horses. However, there is evidence of an earlier building within the walls of the building, probably Moscrope’s Tower, built to control access to the Market Place and one of Jedburgh’s six defensive towers

This was the Town Inn where important meetings and dinners were held, for example when the Circuit Court visited the town. The Judges would march in procession from here to the Court House, accompanied by the provost and magistrates and the traditional “Crailing Guard”, a motley group of soldiers, apparently. The judges, clerks and jurymen would be entertained to “a jolly dinner; after which they returned again to the transportations and hangings”*. Once this got out of hand in Jedburgh when, the excitement and indecorum (of the dinner) produced scenes of violence…which it was miraculous did not in due time place the judge at the bar”.

In 1803 William Wordsworth and his sister visited Jedburgh. They could not get rooms in the Spread Eagle because the Circuit Court was in session, and so they lodged with Mrs Nelly Mitchell in Abbey Close. Walter Scott dined with them at the Spread Eagle and accompanied them around the area.

The inn would have been required to provide stabling and ostler services for the stage coaches that provided a regular service from Edinburgh, Hawick and Kelso to Jedburgh. 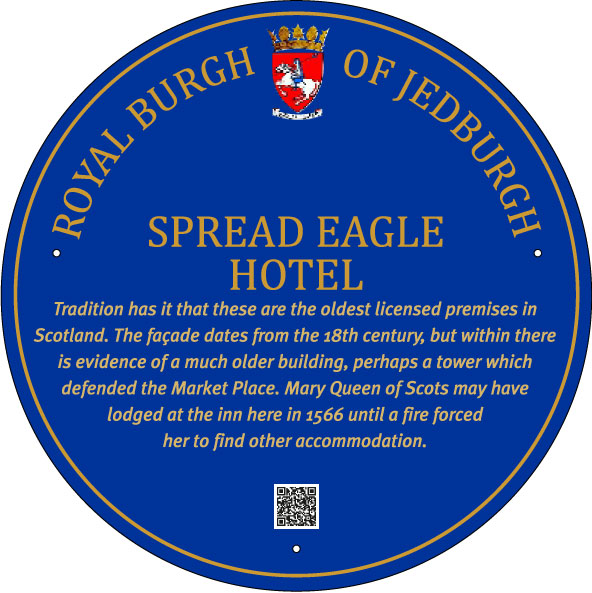