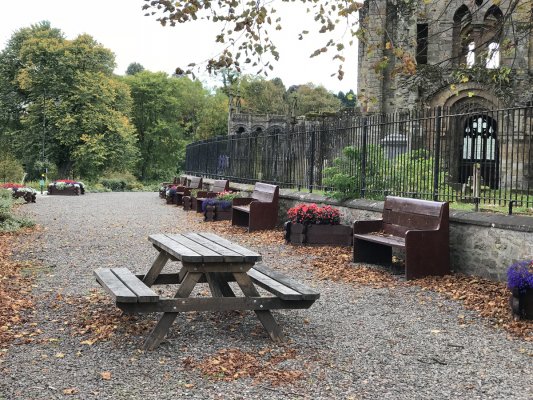 This area of the town, below the Abbey on the east side, nowadays provides an elevated promenade from which there are fine views across the town and surrounding countryside along with tantalising glimpses of the Abbey and the old kirkyard. The Jedburgh War Memorial provides a fitting end point.

However, its history is dramatic and equally fascinating.

This raised platform was created originally in the 16th century as part of an attempt to defend Jedburgh against invading English troops. After the birth of Mary Queen of Scots in 1542. King Henry VIII of England was determined that she would be married to his only son, Edward, later Edward VI. This was part of a policy of unifying the kingdoms and making his northern border secure. France was England’s enemy but Scotland’s ally. The Queen Regent, Mary of Guise, Mary’s mother, was French and reinforced the long standing “Auld Alliance” between Scotland and France. At first the Scots agreed to the marriage but later reneged on the arrangement. Henry’s fury led to an awful revenge on Scotland, known as the “Rough Wooing”. Henry’s troops under the Earl of Hertford invaded in 1544/5 “burned and looted from Leith to the Borders”. Jedburgh was attacked and burned and the Abbey left ruinous.

Jedburgh Abbey was viewed by both sides as a fortress. In the absence of a castle, which Jedburgh no longer had, its strong walls and tower made it both a prize to be captured and a defensive position to be fortified. The townsfolk of Jedburgh and Kelso used their abbeys for defence. Hertford wrote to King Henry in 1544 describing Jedburgh as a “… a house of some strength and may be made a strong fortress…”. He went on to burn Jedburgh and its Abbey and all the villages and towns along the River Teviot.

In 1548 after the defeat of the Scots at the Battle of Pinkie, French troops under General d’Esse used the abbey as a position on which to set up guns. It is believed they threw up ramparts on the east side of the abbey, and built gun emplacements on the south side. Artillery was also placed on the tower. The dimensions of the ramparts conformed with the size of such fortifications found elsewhere in Scotland from that period. They probably used building material from the ruinous sections of the Abbey buildings. Some of the missing stonework of the abbey may indeed be under the ramparts. Along with D’Abies Tower to the west and the tower in the Market Palce to the north, the Abbey tower itself as the ‘citadel’ the defence of the Abbey and in turn the town, would be complete.

During this time the Scots inflicted a horrendous revenge on the English garrison of Ferniehirst Castle, which the French were unable to prevent.

Mary was smuggled to France and the “war’ ended meanwhile. In time she married the Dauphin of France and was, briefly, Queen of that country. As the years passed and the Reformation finally put an end to the monastic life, such as was left, Jedburgh went on to use the ramparts as a ‘fashionable promenade” and the area as a street frontage form the 17th century. 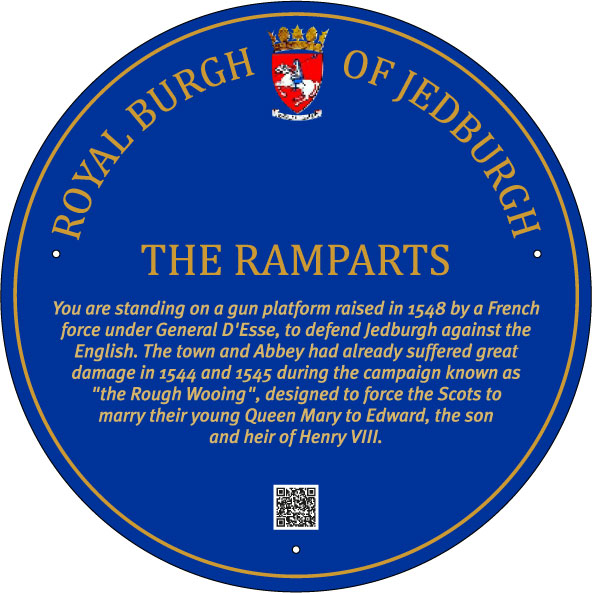