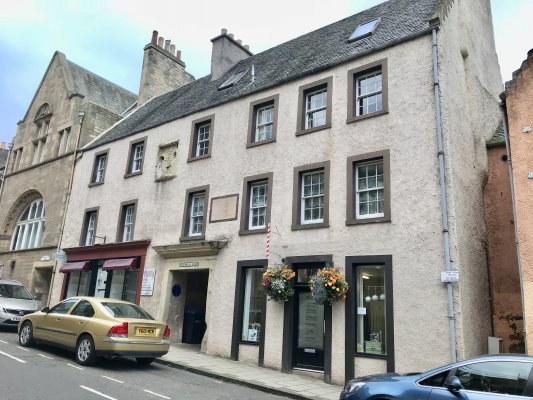 This house in fact served as a residence for the Prince for one night only. It was more importantly a 17th century town house of a locallandowning family, the Ainslies of Backhills, near Oxnam. It was clearly one of the most important houses in Jedburgh but other such “townhouses” were probably a feature of Jedburgh in those days.

What we see today is much altered from the original house, but the form along with interesting architectural features, especially at the rear, give us an idea of the style of the house.

The first thing we might notice on the front of the house.is the large elaborate sundial with tabular and bowl-shaped dials, now almost totally decayed (the crest of Blackhills family could be made out at one time). It does tell us that there was no building to obscure the sun at the time of its creation.

The pend was wide and tall enough to allow horse and carts to enter. It has a shallow arch of pink sandstone (Note the indentations on either side at axle height.) Through the pend the building originally continued all the way along the close.

On the right there is a sadly decayed roll-moulded, lugged and ogee-headed Renaissance doorcase with a frieze and panel above. Originally the house would have stretched all the way along the close.

Bonnie Prince Charlie allegedly lodged in the house from the 6th to the 7th November 1745. (Some say he in fact was less grandly accommodated in a nearby inn). A plaque on the front of the building commemorates this stay.

Charles Edward Stuart was known as “ the Young Pretender”. His father, James Stuart, “the Old Pretender”, lived in exile in France. He believed he was the rightful king of the United Kingdom. His father, King James VII (or James II of England) had been ousted in 1689 in the Glorious Revolution, because he was a Catholic. Thereafter, the monarch had to embrace the Protestant faith. Thus Charles was fighting on behalf of his father for his reinstatement as king. His followers were called “Jacobites” after “Jacobus”, the Latin version of James. This venture was known as the 1745 Jacobite Rebellion.

Charles was on his way south in an attempt to take London, drive out the Hanoverian King George II and so regain the throne for the Stuarts. It is believed that he stopped in Jedburgh to acquire boots for his troops, as Jedburgh was famous for its craftsmen “souters” or shoemakers.

It is not clear whether the townspeople of Jedburgh were for or against the Jacobites, though Jedburgh having suffered economically after the Union of 1707, perhaps they would have sympathy for his cause. The Prince was a romantic figure who would draw crowds of admirers. From Jedburgh, the Prince marched south to cross the Esk into England. He did not succeed in his quest to regain the throne, but he came very close. His army was defeated at Culloden in 1746. He died in Rome in 1788. 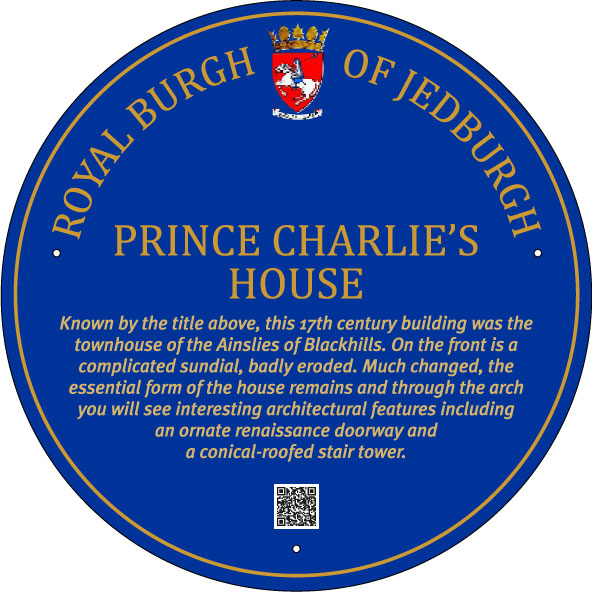