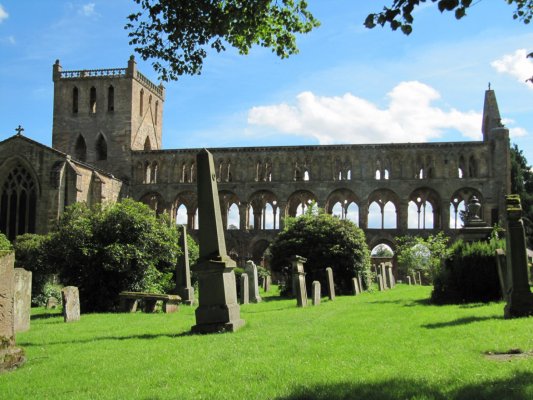 The Abbey
Founded in 1838 by King David 1, it housed Augustinian, or black, Canons from Beauvais. It was well-endowed and important, but suffered many attacks by invading English armies and was burned at least six times. After the Reformation of 1560 and until 1875 it housed the parish church.


Jedburgh Abbey
King David 1 of Scotland, with his Bishop, John of Glasgow, founded a priory on this site in 1138. It is likely that a church had stood there since the 9th century, founded by Bishop Ecgred of Lindisfarne (Holy Island). There is also evidence that this may have been a pre-Christian site, as Roman altar stones (see west gable) may have been placed there because it was a place of local sanctity.

The Scottish Church was ruled from York and David was keen to demonstrate that Scotland could build on a grand scale near to the border with England. He wanted his church to become independent.

The priory was elevated to abbey status in 1154. The king and Bishop John (buried in Jedburgh Abbey) were very pious men and were keen to revive the life of the church. But they also had an eye to the political usefulness of religious foundations in governing the kingdom. King David was famous for the number of abbeys he founded and was often known as “the Saint”.

They brought a community of Augustinian canons (black canons) from France, probably Beauvais. They were not monks, but priests, and they were not cut off from the outside world. They performed masses for the laiety in Jedburgh and in the churches attached to the abbey. However, they would have followed a ”rule’ very like that of other monks. They would also have tended garden and orchards, looked after visitors and the sick, studied and written books and attended to the spiritual life of the abbey.

Jedburgh had many benefactors and became a rich and influential foundation. The early kings of Scotland favoured Jedburgh and visited it and the castle often. The Abbot of Jedburgh played an important part in the Scottish government. This is the seal of Abbot Hugh of Jedburgh, one of the 29 abbots of Jedburgh, from 1156 to 1549.

It is interesting that abbeys founded in association with places of royal significance, eg Holyrood in Edinburgh, Cambuskenneth in Stirling and also St Andrews were often Augustinian.


The Abbey Viewed From The Outside
From the ramparts: this is the East end of the abbey where the high altar would have stood. The architecture at this end, which was built first, is “romanesque”, a rather chunky style with cylindrical pillars. You can see also the transepts, especially the well-preserved north transept, the Kerr crypt. You have to imagine the walls richly painted in bright colours. This part would contain the high altar and would be for the use of the canons only.

From Abbey Close: this is the West end, with its fine ‘rose’ window and processional doorway. The nave would have been built from this end towards the choir at the east end. There would have been access to the very grand nave, the area which the lay people of the town would come to worship or even to meet for other purposes. Their access was through a doorway in the north wall. The architecture of the nave is ‘gothic’ in style, light and airy.


The abbey suffered greatly from its position near the border with England. It was attacked on numerous occasions. Sometimes the abbot and the canons didn’t know which side to adhere to in order to keep safe. During its existence it was attacked at least 7 times until by the 1540s it was ruinous. Armies would take the lead from the roof for armaments. The canons had to rebuild on many occasions and eventually they retreated from their damaged conventual buildings to the only safe place, under the crossing tower. Even then, there was probably a large artillery piece there belonging to one side or another. It was difficult for the order to attract recruits when they were likely to be in constant danger. And so the number of canons dwindled until by the time of the Reformation in 1560 few, perhaps eight, were left and they lived out their lives in the remains of their abbey.

The Reformed Parish Church took up residence under the crossing tower in 1560, but a century or so later the congregation was forced for safety’s sake to move into the west end of the nave. A roof was built within the height of the walls, a gallery and a new entrance porch on the north side of the nave.

The Grammar School occupied part of the Abbey towards the south east corner, until the late 18th century. Among its pupils was JAMES THOMSON (1700-1748). He became a renowned poet, famous particularly for his masterpiece, “The Seasons”, though he is better remembered for the words of the patriotic song, “Rule Britannia”.

The manse (the minister’s house) was situated on the south side. MARY FAIRFAX SOMERVILLE (1780- 1872) famous mathematician and astronomer, was born there.

The church remained within the abbey until 1875 when a new church was built close by. The abbey was then gradually restored to its present state and is now in the care of Historic Scotland. 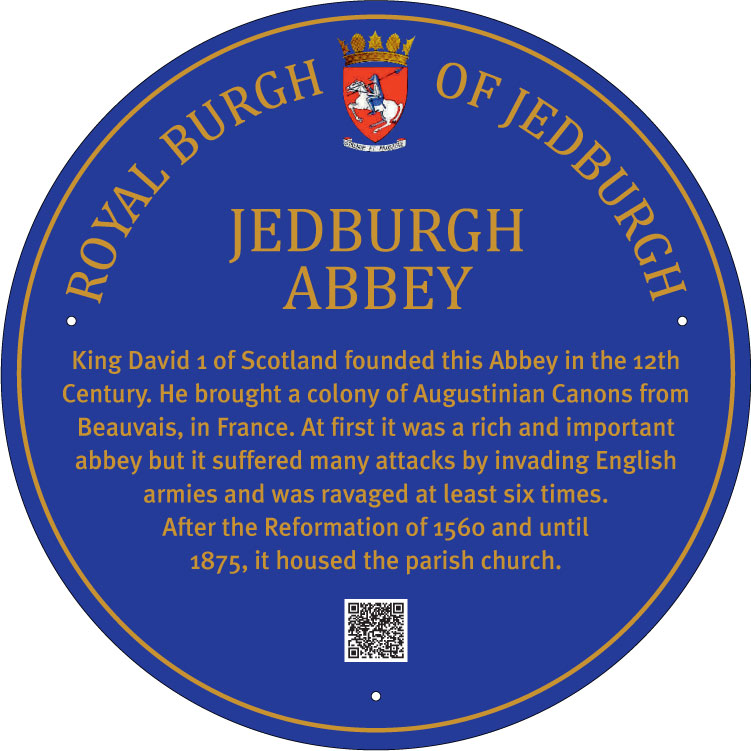