James Veitch was a man of an amazing range of skills and achievements: in engineering, mathematics, astronomy, optical instruments and clock making. He was born, lived and died at Inchbonny near Jedburgh. His education was received locally until the age of 12 and so he was largely self-taught in all his enterprises.

Originally apprenticed as a ploughwright, he used clever mathematics to improve upon James Smail’s famous modern Scots swing plough, and manufactured ploughs at Inchbonny. He won a ploughing match at Timpendean near Jedburgh demonstrating his plough’s effectiveness and it was recognized by the Royal Highland Society of Scotland as being an improved piece of machinery. He also provided the dynamometer which measured the effectiveness of ploughs. For these he was granted 20 guineas by the Society.

In addition, in his leisure time he studied and developed a world-class knowledge of optics. He produced reflecting telescopes and in time was recognized in 1818 as “one of best makers of telescopes now living”. He attracted to his workshop the great and the good from all over the world. Sir Walter Scott was a great admirer and friend who constantly visited Inchbonny, encouraging others to do so. Mary Somerville knew him and treasured the only telescope she ever possessed, purchased from James Veitch. Others who came to know and admire him were scientists of the day such as Sir Humphrey Davy, Sir William Herschel, and the Earl of Buchan.

He was generous with his knowledge, particularly with young people, and his most enduring friendship was that with David Brewster, whom he had taught and encouraged in the study of optics. Sir David recognized his debt to Veitch: ”particularly of you, whom I have every reason in the world to remember….. which you first encouraged me to pursue and in the prosecution of which I repeatedly received your assistance”.

He was credited with being the first to sight the comet of 1811.

During the Napoleonic Wars, French naval officers, prisoners of war, were held at Jedburgh and being sailors they were fascinated by all things to do with astronomy, navigation and optical instruments. They were made welcome at Veitch’s workshop. One officer, Jean-Marie Bazin, rewarded his kindness by painting a picture of Jedburgh , including local figures and events. Another, captured at Trafalgar, said that Nelson’s fleet “saw us before we saw them.” Perhaps the British were employing Veitch’s telescopes!

In character he seemed to be by turn shrewd and outspoken, irascible then patient and kind. He was throughout his life a very religious man being an Elder and Precentor of the Parish Kirk. He is buried in the Abbey Churchyard. 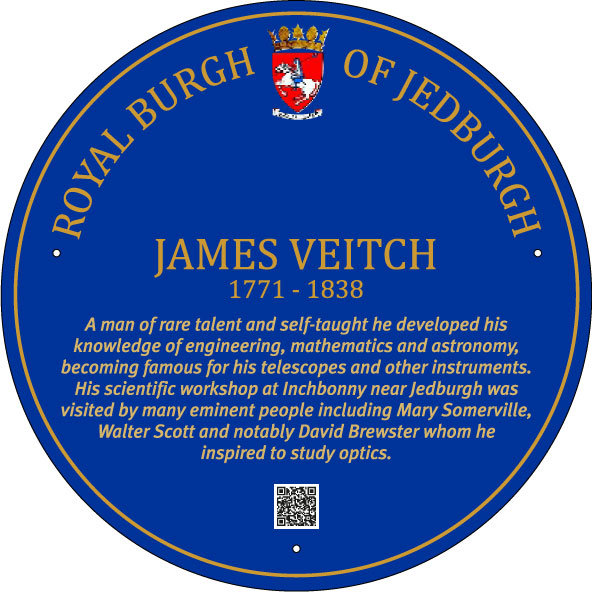