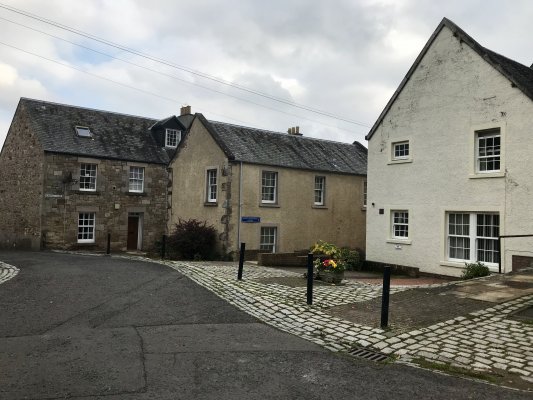 Jedburgh was one of the burghs established by King David I (1124-53) as part of a systematic policy of creating trading centres in order to develop the economy. Burghs did not grow randomly but were carefully planned. To attract suitable settlers into the burghs, each was offered land, a narrow strip called a toft, rig or burgage plot, extending back from the street. The recipients were expected to build and occupy their dwelling house. The land behind was at first used for growing fruit and vegetables and keeping livestock. The first house would have been of wood, wattle and daub, with heather or straw thatch. Gradually stone and slate or tiles replaced these and houses grew taller.

As time went by, they would then let their ‘back’ property to other investors who would build on the strips at the rear. The layout would follow a consistent pattern, with the front elevation of the house usually overlooking the street frontage, and the ‘backlands’ stretching out to the rear. Access to the backlands was through narrow wynds, pends or close, creating a dense ‘herring-bone’ pattern of housing.

Jedburgh retains the shape and style of this form of town planning. While the buildings have altered over the centuries, the layout of the streets has been retained. There are four main thoroughfares organized in a cross-shape: the Castlegate, the High Street, the Canongate and Burn Wynd. Off these streets are closes, and wynds, forming a traditional ‘herring-bone’ arrangement, as can be seen most powerfully in Edinburgh.

In these closes would be houses,, inns, workshops, stables and byres. They were named variously, after a key proprietor, such as Ninian Bell’s Close, an inn, such as the Nag’s Head, or Dean’s Close from its association with the Abbey. Other names are a mystery and their meanings have been lost over time.

In the 1970s, the closes of Jedburgh were found to be largely ruinous and the people who had lived in theses densely populated areas had moved away to more modern accommodation. It was decided to restore as much as possible of the buildings while making modern housing within the old structures or building anew in the style of the old.

The reconstruction allows us to envisage the royal burgh in bygone ages. As well as retaining as many original features as possible, the architecture has striven to reflect the styles of the Scottish burgh architecture, with forestairs, drum towers, and corbelled gables.

Burgh Terminology
The Scottish burghs had their own terminology for the streets and buildings, eg gate or ‘gait’, a main thoroughfare, such as Castlegate, the street lading to the castle; wynd, a narrower street; close, an alleyway through a building to the houses behind; yett, a gate often used to close off the alleyways at night; pend, a wider close which allowed vehicles to pass through; port, a large gateway built to control access to a town. 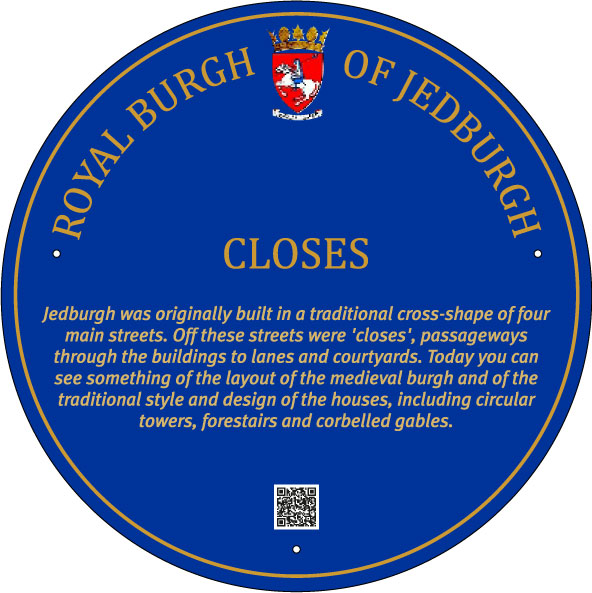