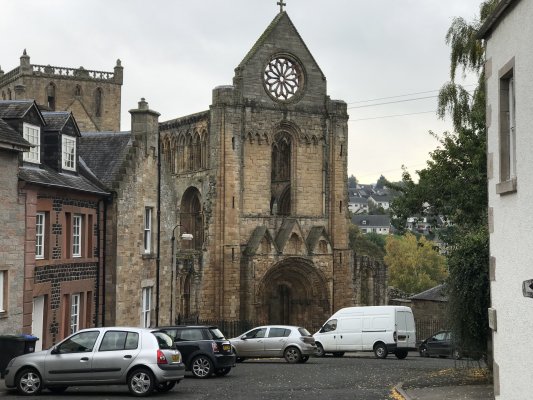 This little cul-de-sac off the Castlegate is full of fascinating features. Immediately as you enter the street you are struck by the magnificence of the great ceremonial west door of the Abbey with its beautiful rose window, leading to the nave.

The close indeed led originally to that door and to the west range of claustral buildings, which may have included the Abbot’s Hall or guest accommodation. Certainly there is evidence of a kitchen or other domestic features. That area was demolished in the 16th century to provide gun emplacements against invading English armies.

The entrance to the close was guarded by a tower, D’Abies Tower, one of three towers which defended the Abbey, very necessary in an area frequently under attack. Probably called after an Abbot David or perhaps because of the proximity of the Abbot’s lodging, the tower was demolished in the 17th century. The entry may have been much narrower judging by the name “close” applied to it.

The Augustinian Canons undertook full pastoral duties and the nave would have had served the parish as a church in pre-Reformation times. Access to the nave for the burghers of Jedburgh would have been by the Kirkstilegate, leading from the town through the kirkyard. The kirkyard was originally the lay burial ground, in contrast to the monastic graveyard which was to the south and east of the Abbey.

The Close has seen many changes over the centuries. The little houses to the left-hand side would have had no garden ground, butting on to the graveyard, the High Church Yard, as they do. This area was known as Bellsbraehead or variants of the name, believed to be the site of the building where the Abbey bells were housed. At some point the bells were stolen by the English.

In the 16th century a road was created, the Bow, round the perimeter of the demolished Abbey buildings. At one time the close was used as a horse market and indeed was known as Horse Close.

Post-Reformation, the Abbey Church was used as the Parish Church and the house of the minister, the Manse, was built on the south side of the abbey, behind the present wall. It was in this house that Mary Fairfax or Somerville, the famous mathematician and astronomer was born in 1780.

The Nest or Wrain’s Nest on the right is of ancient origin. In the 16th century a building on this site was granted to the Hume family by King James VI. It later became a famous boarding school, the Jedburgh Academy or The Nest Academy.

On the left you can see the house where William and Dorothy Wordsworth lodged in 1803. They were entertained at the Manse during their visit and conducted around the area by Walter Scott.

Opposite you can perhaps detect the location of the old town fire brigade. This was built on the site of a fountain or cistern, called the Bow Wall, providing water for that part of the town.